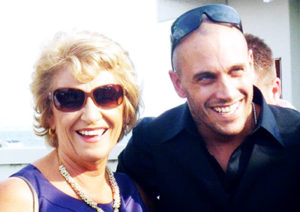 On the 25th June 2000, at approximately 3.30 pm my son Josh (18 1/2 years) attempted to jump a road in the snow on his snowboard. My son, an experienced snowboarder, had boarded with the best in Switzerland as an exchange student, he had just been offered a professional snowboarding contract, but this day something went terribly wrong.

He crashed to the road, completely crushing his spinal cord at C5 – T1, in those crazy early minutes he had the choice to live or die. He felt his body closing down, he knew he was leaving this earth plain, he went to say to his best friend to look after Kze (his name for me) and something stopped him, at that instant of hesitation he chose to live!

Admitted to one of the best spinal units in the world (Melbourne Australia), within 9 hours the doctors had given up on my son. Their “learned” prognosis was Josh, if he lived had 3 % chance of any recovery they “labelled” him a “Complete Quadriplegic C5/T1” never to get out of bed again!

With a broken heart I got angry! How dare they make those decisions regarding my son’s future, in the space of 9 hours, Josh was an athlete used to injuries, used to working through them – his medical team said there was no hope and we needed to accept this! After I challenged one of his doctors, he said “that’s the problem mother’s like you, I feel sorry for your son, he will have a terrible life!”
While we had been waiting in the room for news of my son, I received an urgent message from the Universe “massage his finger tips and toe tips, there are people around who will help you, never give up!”

Later that evening a 2nd urgent message, Josh would throw away his wheel chair within 2 -3 years, early that same morning the 3rd message – I was given the names of those who would be the “A” team. You could say a bit of a motley crew, my best friend a physic healer, her daughter in law who was a chakra expert and spiritual healer and our chiropractor Simon. In the first 15 hours from the accident I was given the beginnings of Josh’s recovery “Game Plan by the Universe”
From day 2, we massaged Josh’s finger and toe tips for hours. My friend would meditate and she would be given “universal messages” of what we needed to do – teach Josh meditation, visualisation – he needed to see himself healed he was injured not disabled.

Three-and-a-half days after the accident Josh’s doctors successfully re built his smashed vertebrae and removed the bone fragments from Josh’s crushed cord, they were the best there was at this, but they were about mending not about healing so for them their work was over.

Our mantra was enable Josh not disable him! We would never research the internet, we would return to our own community, we would not at any time live in the world of spinal cord injury! We made those decisions in the first week after Josh’s injury and to a large extent for the first 11 years we stuck to them. We didn’t even know what SCI meant until late 2011 so distanced we were from the language of the community.

How did he achieve this? Well 16 years later we have worked it out, Josh re trained his neural pathways, he moves from his brain his cord has so little function. The doctors are still early days with this technology / research we have been living it for 16 ½ years…

Our diligent massaging in those very early days, kept the messages moving through what was left of Josh’s cord that functioned, learning visualisation, Josh spent hours reconnecting his body, our team ensured Josh’s body was totally adjusted allowing the chi energy to flow through his body. Josh used visualisation to learn every movement, whether it was learning to sit again, stand, drive his car, and walk. I used to “spirit” our ever growing healing team into the hospital and rehab. They weaved their magic behind closed curtains and when in rehab behind locked doors. We stuck to ourselves, only making polite hellos to the others in the ward. Frankly I had no interest in taking on anyone else’s sadness, fear or “story”! Probably sounds selfish but in my mind I was fighting for my son’s life nothing else mattered.

A series of incidents caused me to lose trust with the hospital so I rarely left it, maybe a couple of hours a day to go home and clean up…Pick up messages from the message bank remember it’s 2000.
We took all Josh’s meals in except breakfast, that couldn’t be messed up like lunch and dinner was!
After 4 ½ months we “broke” Josh out of rehab and took him home. He started back at his old Gym, always transferring out of his chair to work out! He had a personal trainer from the gym who knew nothing about SCI. They worked out together 4 hours a week for nearly 4 years. In the May after his accident he went to the USA for 6 weeks to work with a Chi master in Irvine CA. Josh stayed with friends, and for any emergency both my friend and her daughter in law travelled with him…

Fast forward, Josh rides motorbikes, snowboards, tried weigh boarding last year but still doesn’t feel most of his body. His bladder and bowel have never recovered. He only uses a wheel chair in airports…
Josh married the love of his life Amelia, in 2013 and on the 22nd January 2016 they welcomed their little miracle AJ…

Josh has learned to live with 24/7 nerve pain from C5 down at 15 / 10… He has learned to appreciate his ongoing recovery. There is so much I have left out we have both written books – Josh’s “Relentless Walking Against All Odds” mine is “Warrior Mom”.